Check out what's new this week!!  We have more coming in next week too so be sure to follow our link to the bottom of this post!!  We'll have it all online as it comes in as well so watch for updates!
Jillibean Soup.... 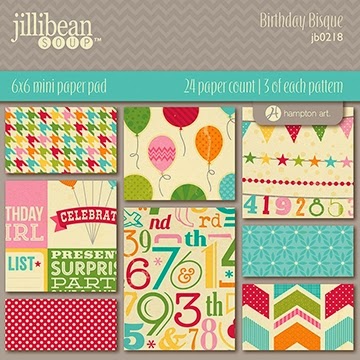 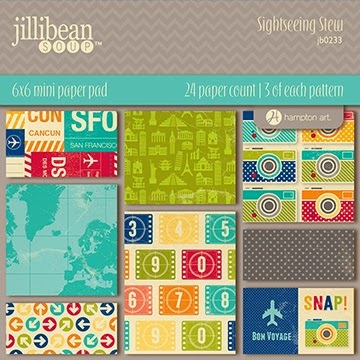 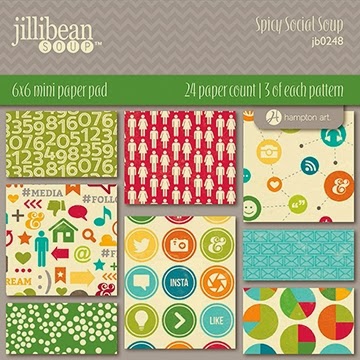 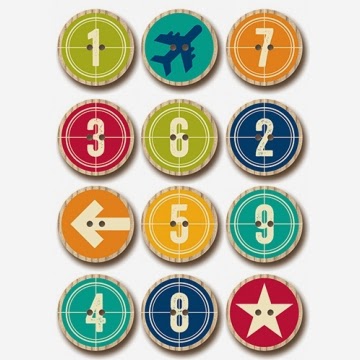 Coming in Tuesday::  Simple Stories--DIY, Fresh Air, Summer Paradise, Hey Mom, and Hey Pop!
Coming in Thursday:: Echo Park--Splendid Sunshine and Getaway!﻿
Visit us in store or online today :)
Check us out on the web here...What's New!
Posted by Scrapping Bug at 11:57 AM No comments:

Hello everyone.  I thought I would share another sketch with you that I did while I was enjoying a warm cup of tea.   I don't have any fancy computer program where I can create the sketches - I like to do them free hand.  I went to my favourite scrapbooking retreat this past weekend and I took this very rough sketch with me. I ended up doing 6 layouts using this sketch.  I did add some pieces and moved things around to make the layouts look different.  But I was very pleased with how they turned out and I plan on doing this more often.  Here is the sketch. 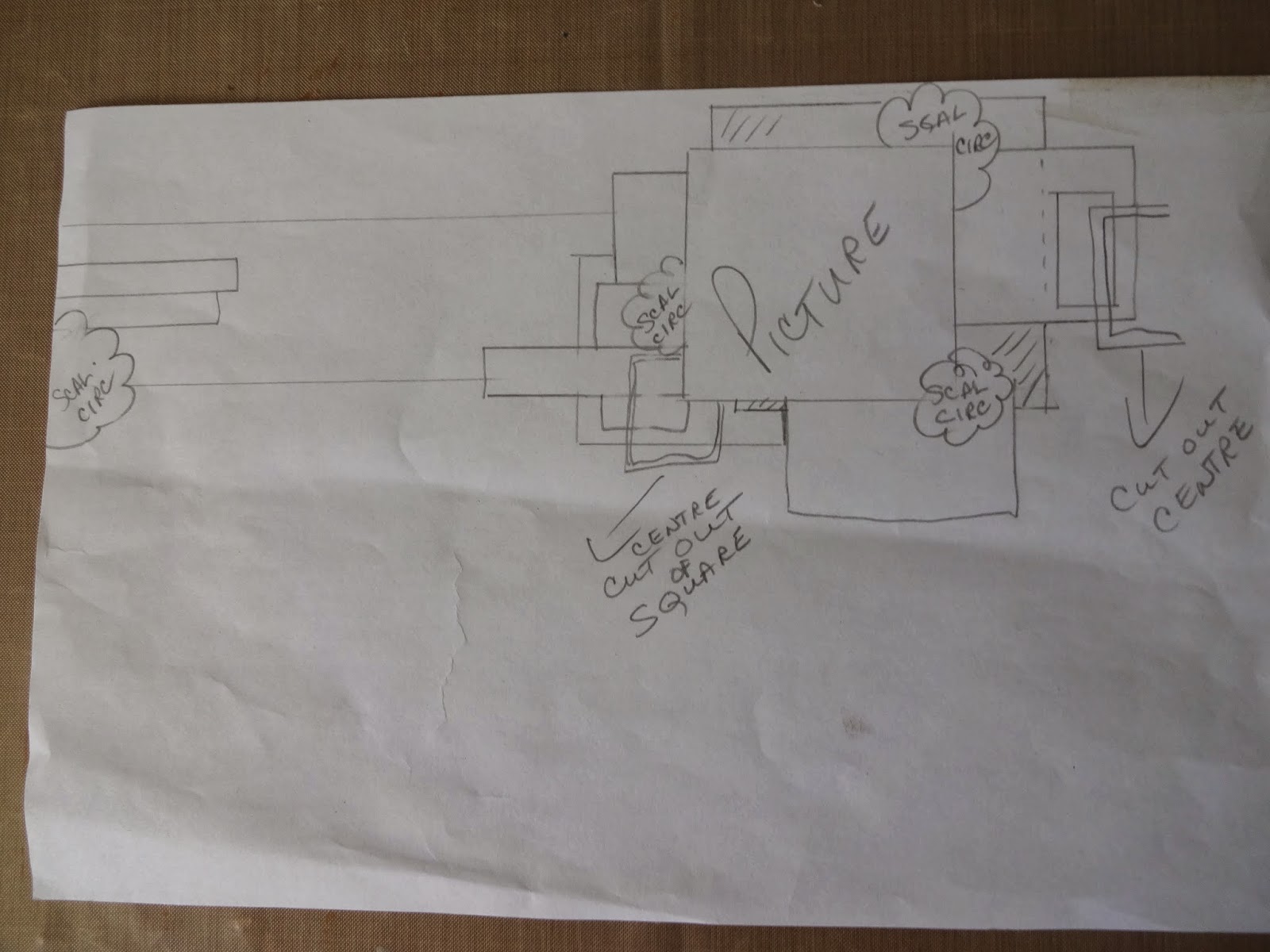 Here are a couple of the layouts I did following the basics of the sketch. 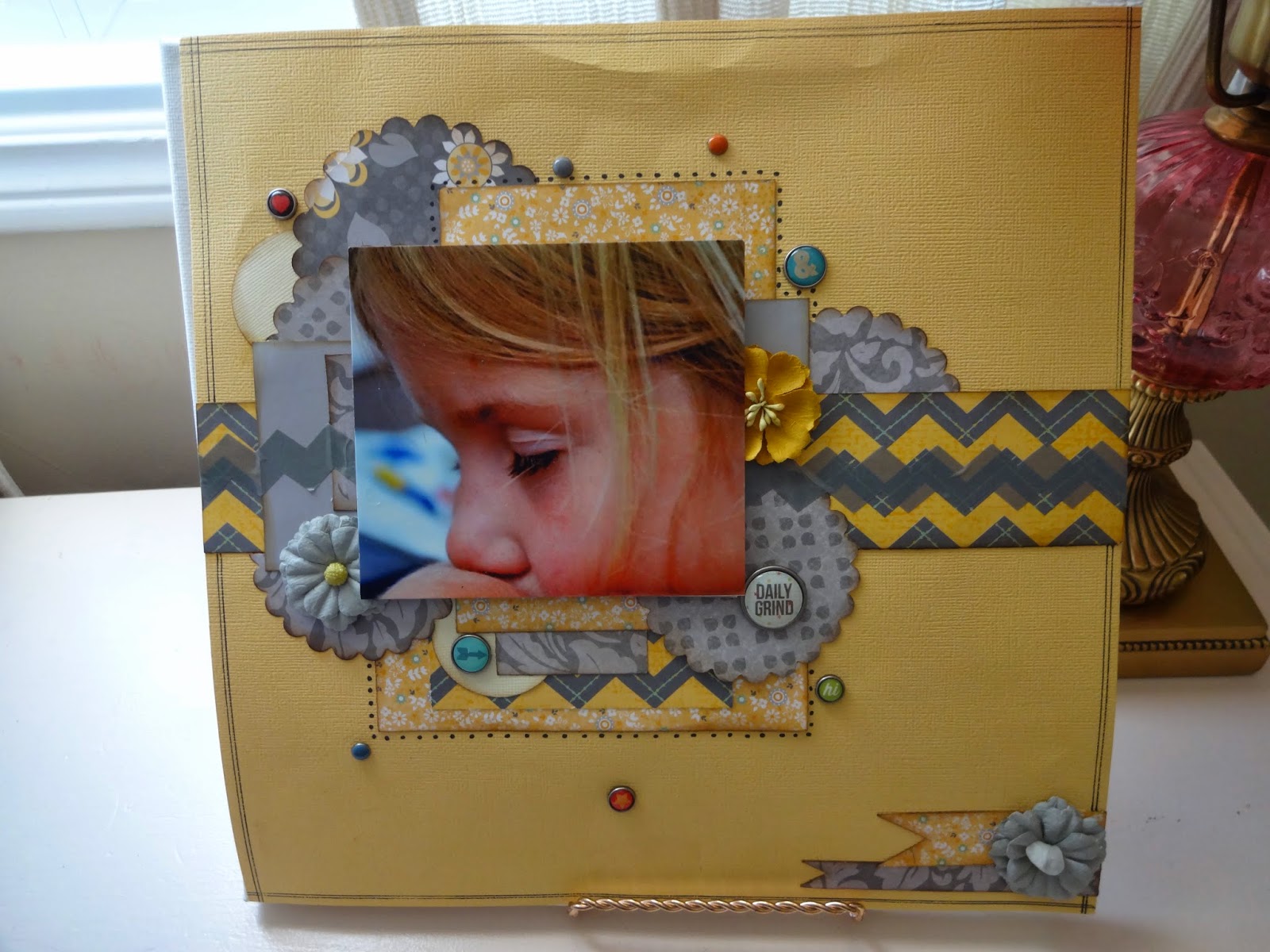 For both layouts I used the "Capri" Adorn It line of paper which is two-sided paper.  Using papers from the same line really helped as they have the colour flow that I like. 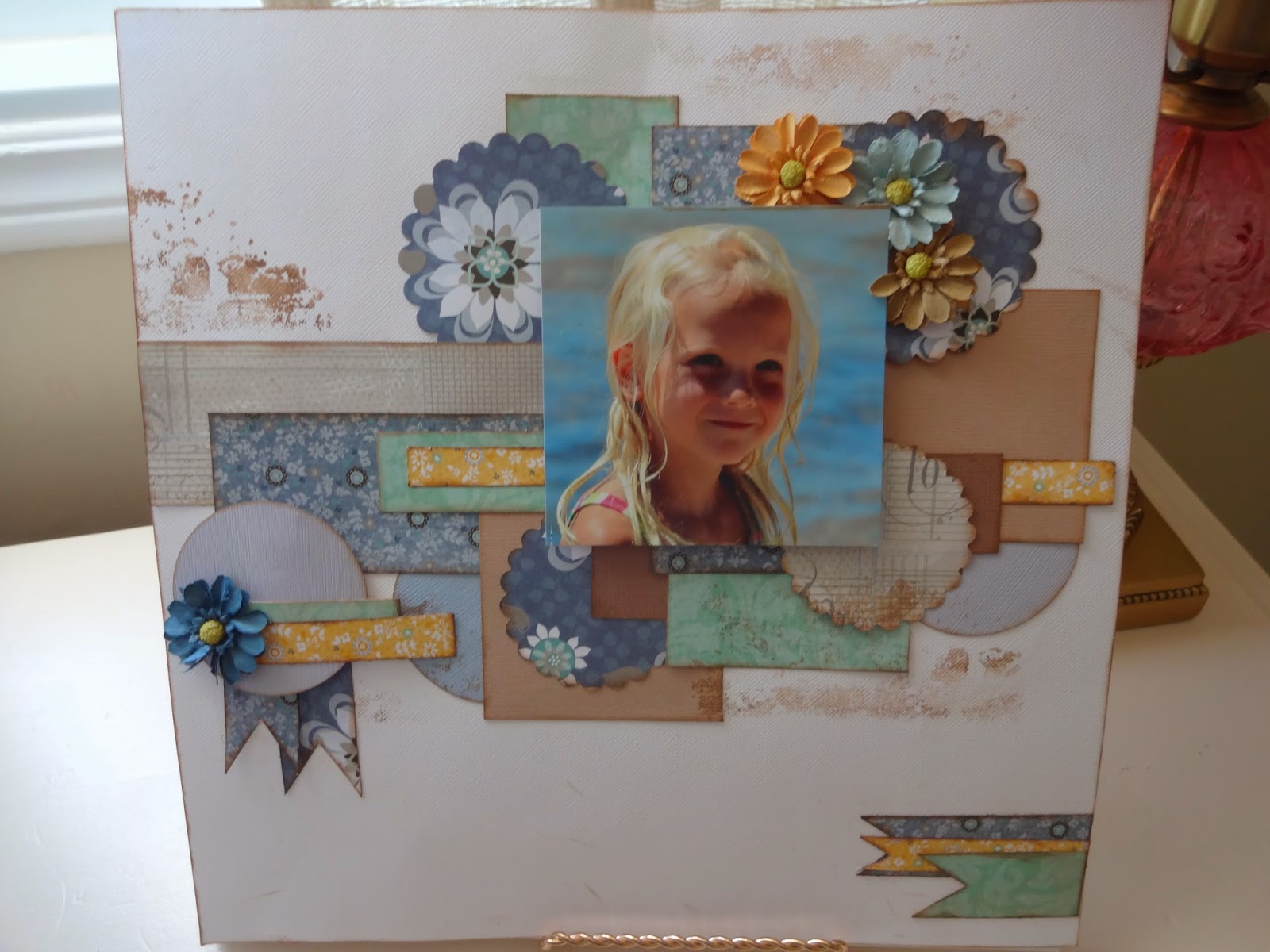 I began by placing my picture onto the layout where I wanted it to go without adhering it down.  I then started to cut some of the main pieces according to the sketch making sure that the patterned papers had a colour flow and went well together.  I didn't care about patterns as long as the colours were okay.  I also cut pieces with cardstock that blended well with the patterned papers.   As I cut my pieces, I did not adhere them down right away.  I wanted to make sure that they were placed correctly.  I only added a few flowers to the layouts and some small brads.  I did add some flags which are not shown on the sketch.
I now plan on getting out my box of scrap papers and co-ordinate colours and patterns that go well with each other.  I  plan on mixing and matching papers from different companies.  This will be a great way to use up some papers scraps rather than letting them collect dust.
More sketches and layouts will be on the way soon.
I hope you enjoy!!!  Try this idea.  I am sure you will create some great layouts.
Until next time
HAPPY SCRAPPING!!!
Posted by Scrapping Bug at 4:01 PM 1 comment:

"Using Up My Scraps" Layout

Hi, Donna here - I am back from my vacation and I thought I would share with you a layout I did using scraps from my scrap bin.   I used scraps from the Little Yellow Bicycle "Splash" summer line that came out a couple of years ago.  You don't have to use papers from the same company - just remember to make sure that each paper has similar colours in it.  Don't be afraid to mix all different patterns together.  I started by cutting a few of the larger pieces as shown below.  These pieces I adhered in place but only in the centre,  then I placed my picture where I wanted it to go - without adhering it.  This will allow you to move the picture if necessary. 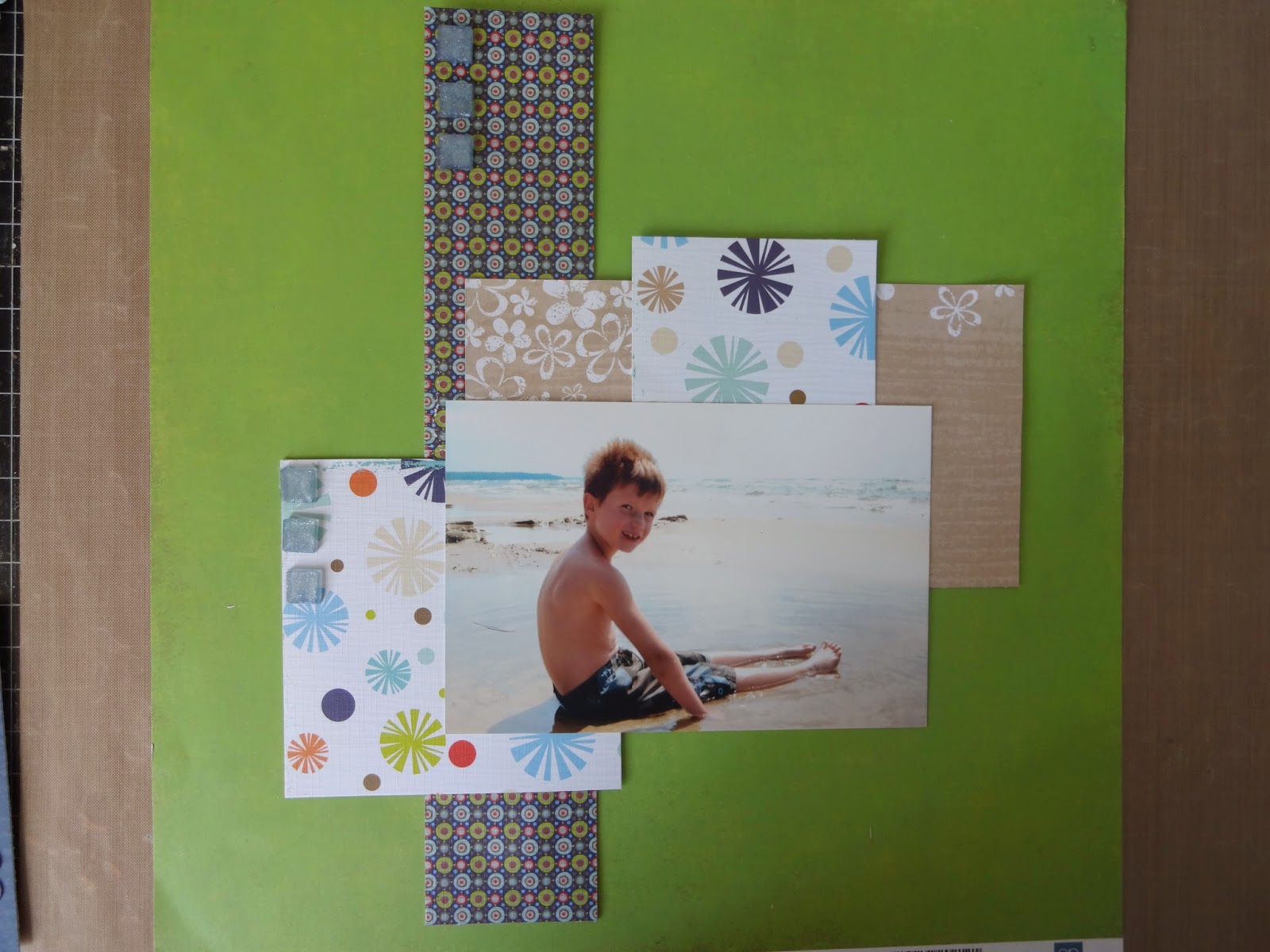 I then began to punch and cut various shapes and sizes of the patterned papers.  I used circles, some small, some large, some scalloped and some plain.  I used squares and rectangles in different sizes.  I used the "odd number" concept  as much as possible and mostly cut 3 of each.  Some patterns I cut 4 of each.  Without gluing, I began layering the shapes in and around the picture by tucking them under the corner or side of another shape making sure that you don't have all the shapes from one pattern on one side.  You want to balance the pieces.   Here is a picture below of my start of the layering.  By not gluing the shapes down, you can still move things around until you get the look you want. 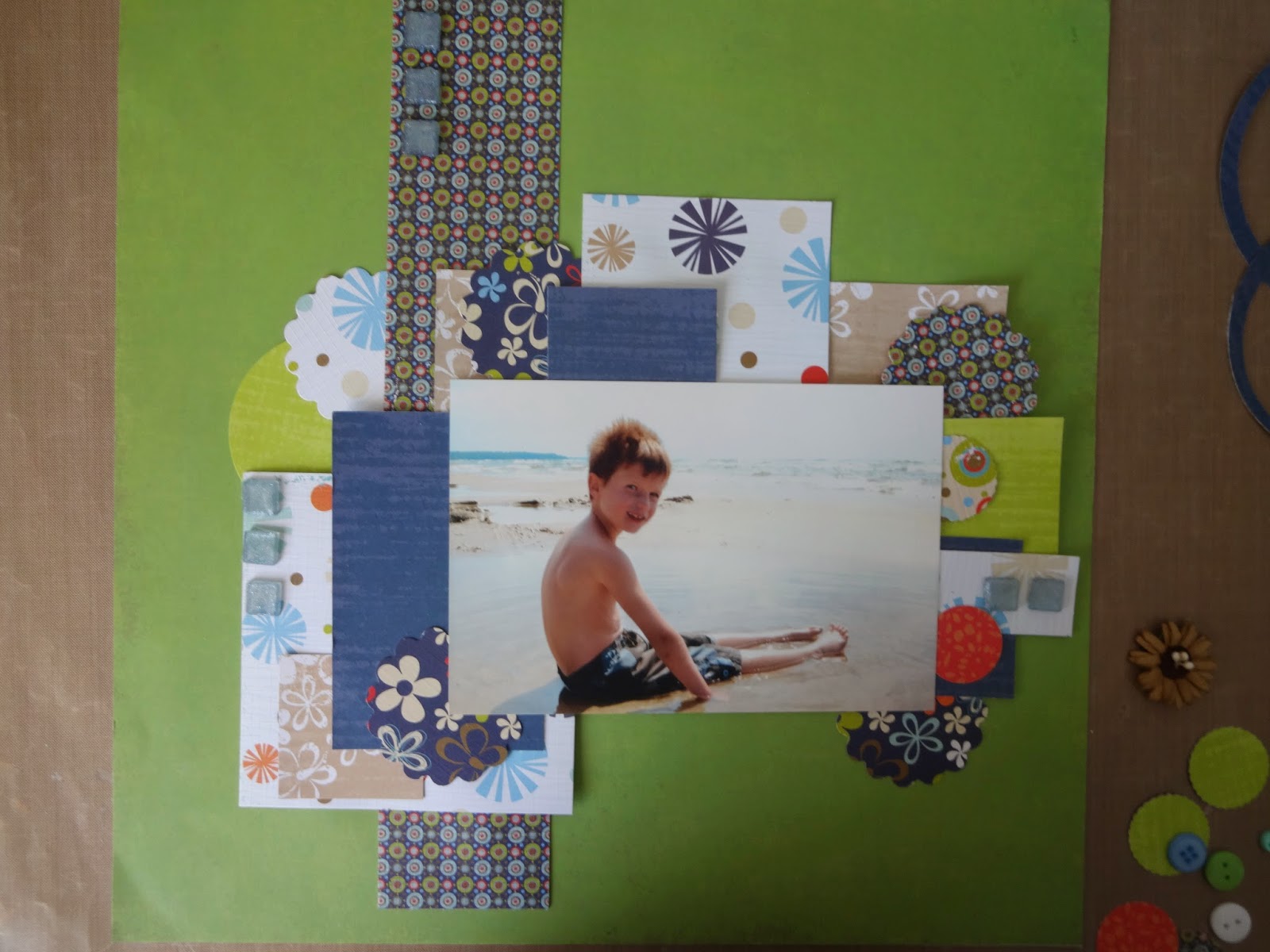 This is the completed layout. 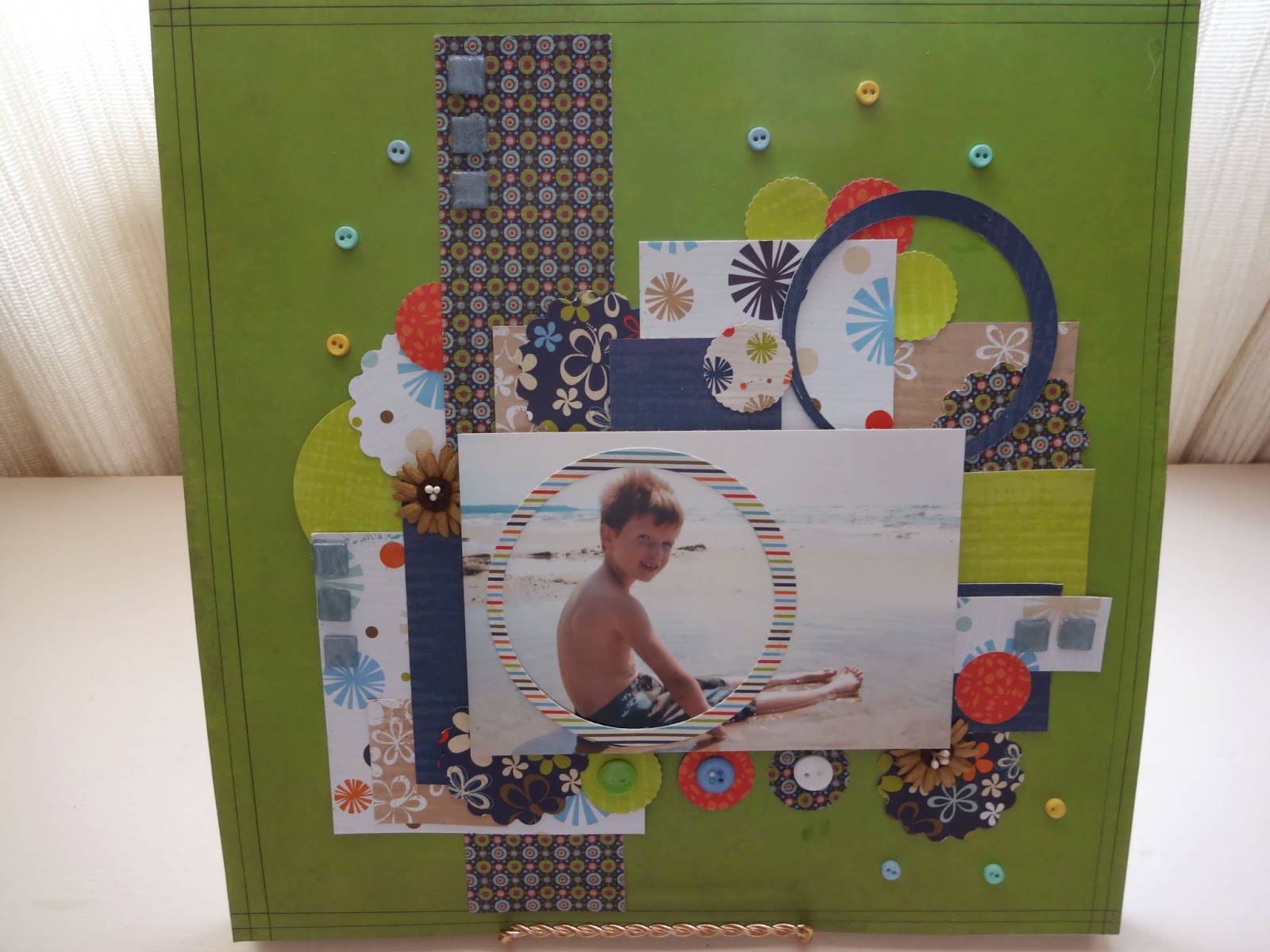 Because of the different patterns, I found I could keep the embellishments at a minimum.  So I used some buttons in the circles below the picture, some very tiny buttons on the background paper - 3 of each in 3 areas then I added some mosaic tiles that I also had in my stash and a couple of small flowers.  To take away from the plain outside edges of the background paper I drew double black lines.  To accent the picture I cut out the centre of a circle and put it around  the cute little person in the picture.
I hope you enjoy.  Try this method - not only are you using up scraps but you can create a very colourful layout.   Again don't be afraid to mix patterns and layer them with each other.
Until next time
HAPPY SCRAPPING!!!!!

Posted by Scrapping Bug at 2:02 PM No comments:

Now available in store and online!! Tons of great products!

We made it through all the boxes and everything is out on the shelf and available online.  Check out all the fabulous product lines that came in.  To shop online follow the link below :)
From American Crafts, Imaginisce, Crate Paper, Pebbles Inc., and Project Life!! Theres a lot of variety for themes...travel, boy, girl, baby, summer and spring!!

Posted by Scrapping Bug at 3:52 PM No comments: