Good morning everyone.  This is an update for everyone to let you know that we are hard at work countin inventory and updating product in our on-line store.  We hope to be completed most of the updating very soon.  Our on-line store is currently still open and you can still place orders.  We know that you will be pleased with our future plans for the Scrapping Bug.  Lots of new products, lots of new layout kits, plans for all-day crops, etc. are in the coming months.  We will keep everyone up to date here on our blog.

Now I would like to share with you a project that I completed that will make a very nice gift for that special person.  At my local dollar store I found several wood gift boxes that were very inexpensive.  I purchased the one below because of its shape. 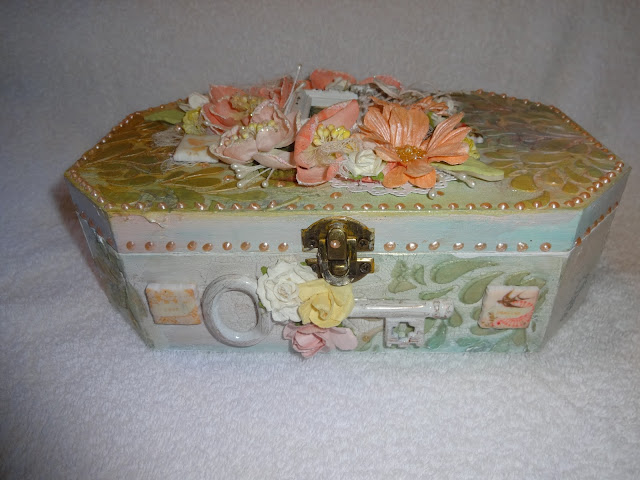 First, I painted the entire surface of the box inside and out with a cream coloured kraft paint to give it a protective seal but also so that no bare wood  will show.
I then took crackle paste from Prima and applied it all over the top of the lid and the base of the box.  Using my heat gun, I dried the crackle paste.  I then took an acrylic stamp and stamped randomly with black staz-on ink to give more texture.  I then took one of my favourite stencils and moulding paste and applied the paste just at the ends of the lid as well as around the base of the box.  Using a paint brush I very lightly brushed on some Prima Colour Bloom sprays in glistening waves and sorbet, using the sorbet first, then the glistening waves then came back very lightly with watered-down tangerine.  I used a brush rather  than direct spraying as I wanted to control how much and where I put the sprays.  Make sure that you play with your colours on a scrap piece of paper to get the combination that you want.  I only wanted a bit of contrasting colours mainly around the outer edges of the box lid  I also went over the stencilled areas.  You can add one of the colours to the rim of the lid and the base.
This next step I found to be worthwhile to give the box extra protection.  There is a product that you can get from most craft stores called Decopauge.  Some of you may be familiar with it.  It is a clear liquid that dries quickly to a gloss finish.  Simply apply it with a flat paint brush making sure that you don't go back and forth and keep your brush strokes going the same way.  This will protect the box from any finger prints or water damage and give it a nice finish.  All I had to do next was my embellishements.  Below is a picture of the top of the lid. 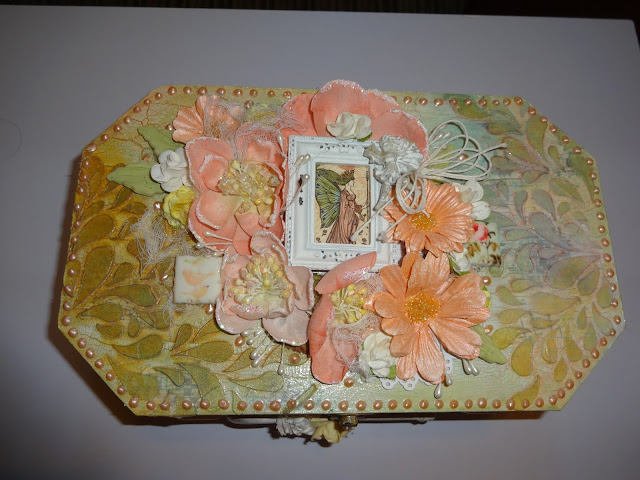 For some reason ,this year, I am liking the peach colours.  I find it very refreshing and colourful.   I placed a picture of a fairy into a small white resin frame and adhered it at the centre.  I used a hot glue gun for all my items for a stronger hold.  I placed the flowers around the frame along with some small tiles, a loopy bow from fine cording and some pearl drops that I found in the wedding dept. at Michaels's.  And finally around the outer edges of the lid and the lid rim, I placed dots of dimensional pearls in a peach colour.  Then I added some items to the front of the box base as you can see above. 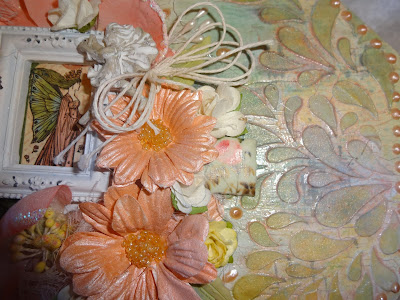 I hope you enjoyed this latest project.  Until next time,

"HAPPY SCRAPPING"
from Donna
"If I'm not at the mall at least twice a week, they send me a Get Well Soon card"
Posted by Scrapping Bug at 10:36 AM No comments:

Today I thought I would share with you a couple of canvases.  They are 9" x 12" which is my favourite size to use.  I used some mixed media techniques on both and have included some closeups of sections of the canvases. 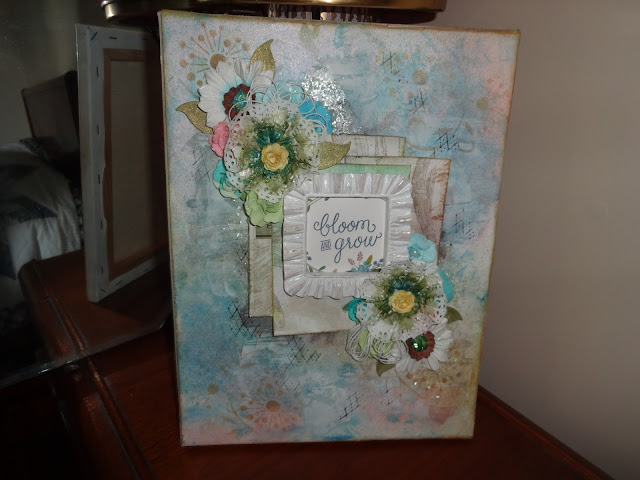 The background for this one, above,  was created using various sprays, stamps and stencils.  I backed the frame in the centre with pieces of paper and then added them using pop dots.   I had a quote block in my stash which I adhered to the back of the frame in the centre.  You could also add a picture.   I added some glitter at the bottom right corner and at the side of the flowers at the upper left corner.  I also inked the sides with a brown ink to define the edges.  I made the large flowers using paper doilies.  A picture tutorial is at the end of this blog on how I made them. Very easy.
A couple of closeups 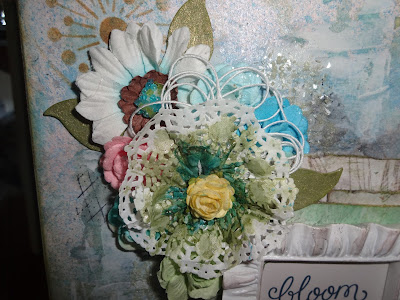 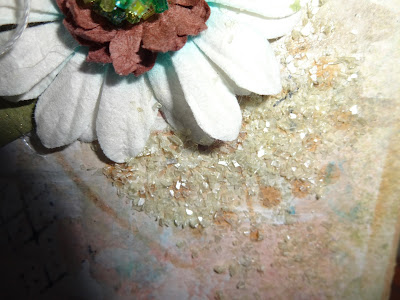 For the next canvas I used the same technique with the sprays for the background.  I did place a thick coat of heavy gesso using a spatula onto the canvas first which gave it more texture.  Using moulding paste and a word stencil, I added this to the background. 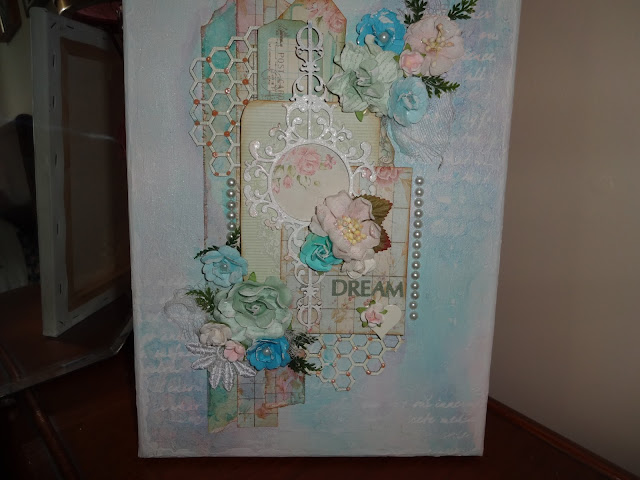 I cut strips of various patterned papers, tore the ends on a slant, then layered them .  I also used some honeycomb chipboard pieces which I embossed first with white embossing powder.  After I completed the entire canvas, I added some dimensional pearls to the honeycomb chipboard.  The centre decorative piece is   embossed  with white embossing powder.  I cut out the flowers in the centre from a patterned paper and adhered it to the back of the frame.  I also layered some papers behind the frame and used pop dots to adhere to the canvas.  Added my flowers as shown making sure that they were in the same colours as the sprays that I used.
A couple of closeups 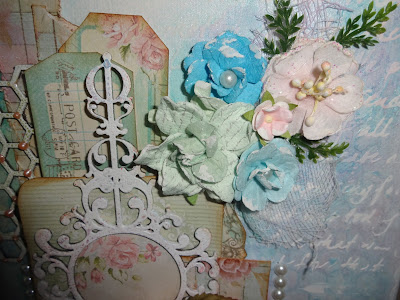 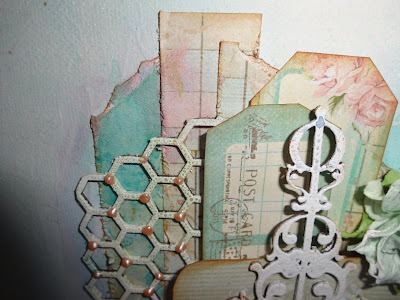 Doilie flower tutorial:  First you will need a doilie.  I used a 5" doilie for my flowers.
Fold the doilie in half and crease so that you get the centre. 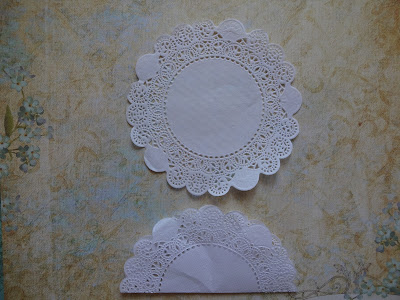 Next, unfold the doilie and pinch the centre of the doilie with your fingers, which you see below.
Holding the pinched point turn it upright and carefully begin adjusting and fluffing the doilie to create ruffles and to get it how you would like.  If you want you can add some glue at the centre, but I found it was not necessary.  I then took some glimmery paint (two colours) and painted the centre of the flower.  When this was dry I added and adhered another small paper rose to the centre.  And there you have it.  I will mention when I adhered it to my project I nipped off the pinched point on the bottom first so it laid flatter.  I knew once it was adhered down the flower would not come apart. 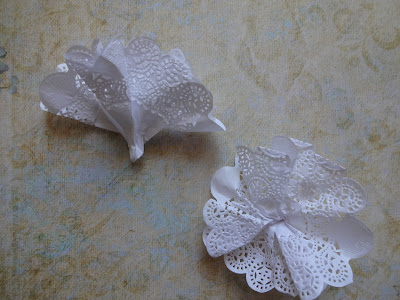 And there you have it.  I hope you enjoyed.  Please give the doilie flower technique a try.  I bet you will find yourself making lots of them.
Until next time
"Scrapbooking is so much cheaper than a psychiatrist."

Posted by Scrapping Bug at 5:11 PM No comments: