Today I thought I would share with you a 9 x 12 mixed media canvas that I completed.  Everything I used on this canvas was from my stash.  Canvases are a great way to use up a lot of your items that have been waiting to be used.   I am going to give you a brief tutorial on how I achieved this.  The picture is from a box of goodies.  You can use an actual picture of somebody if you wish. 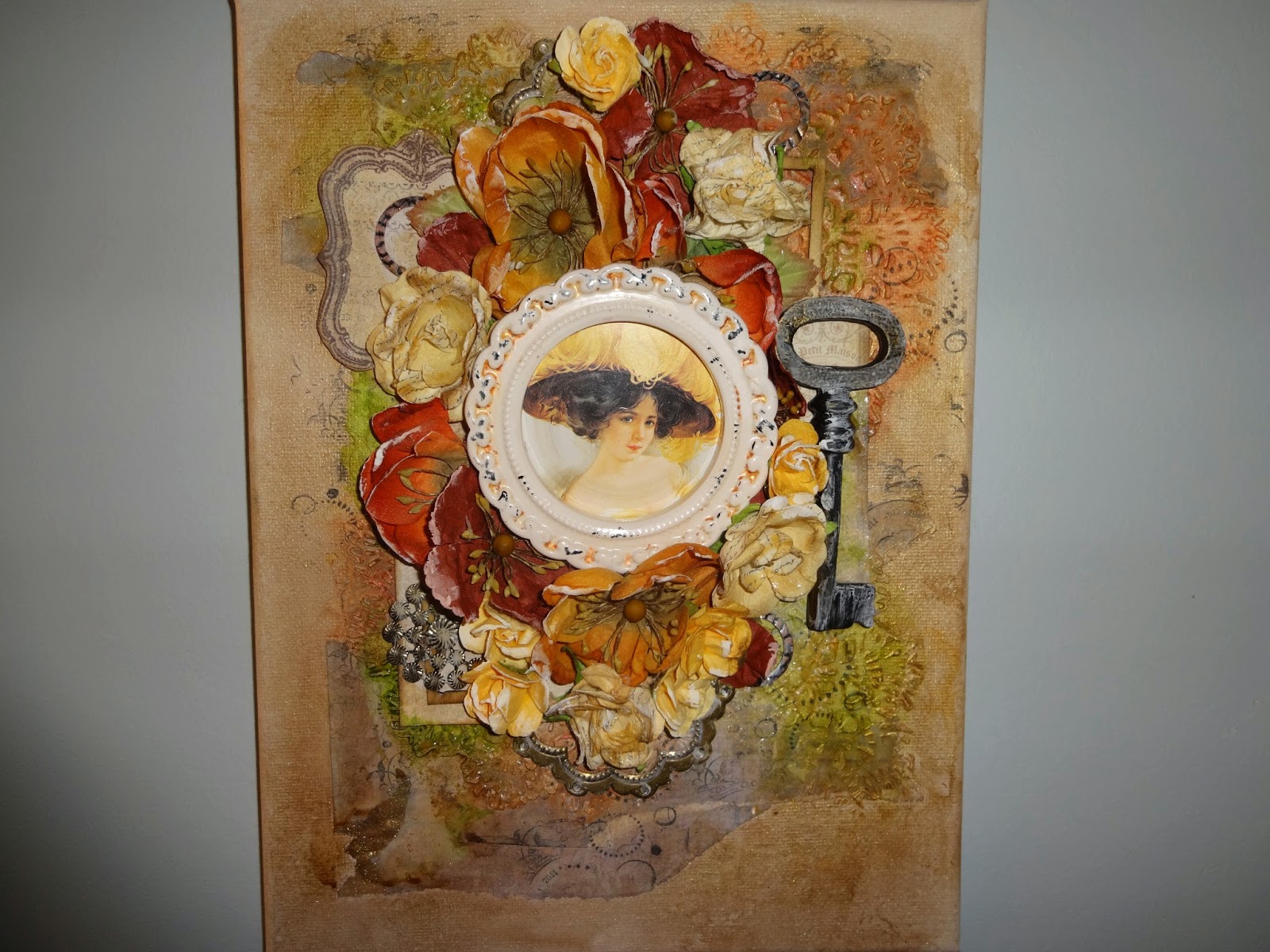 I first took my canvas and painted a coat of clear gesso over the entire surface.  This gives a good foundation for all the other products that I applied.  I then took a patterned paper and tore a large piece off to go down the centre of the canvas.  I adhered the piece using matte gel meidum which is my favourite.  I tore smaller pieces of another patterned paper and adhered on top of the centre piece as shown below.  I then put a coat of the matte gel medium on top of the papers. 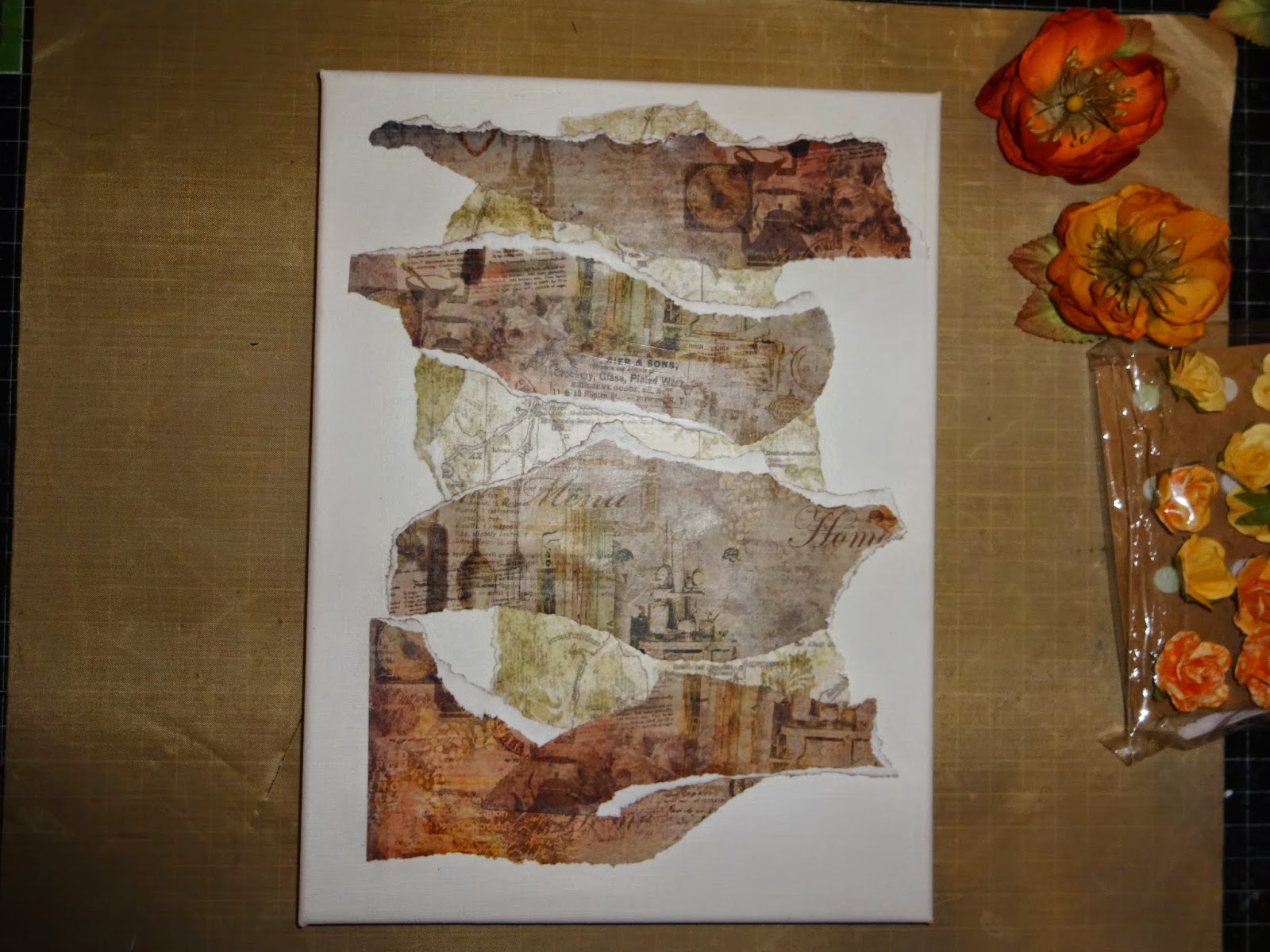 I then took a stencil and using modeling paste I placed the stencil around the perimeter of the papers. 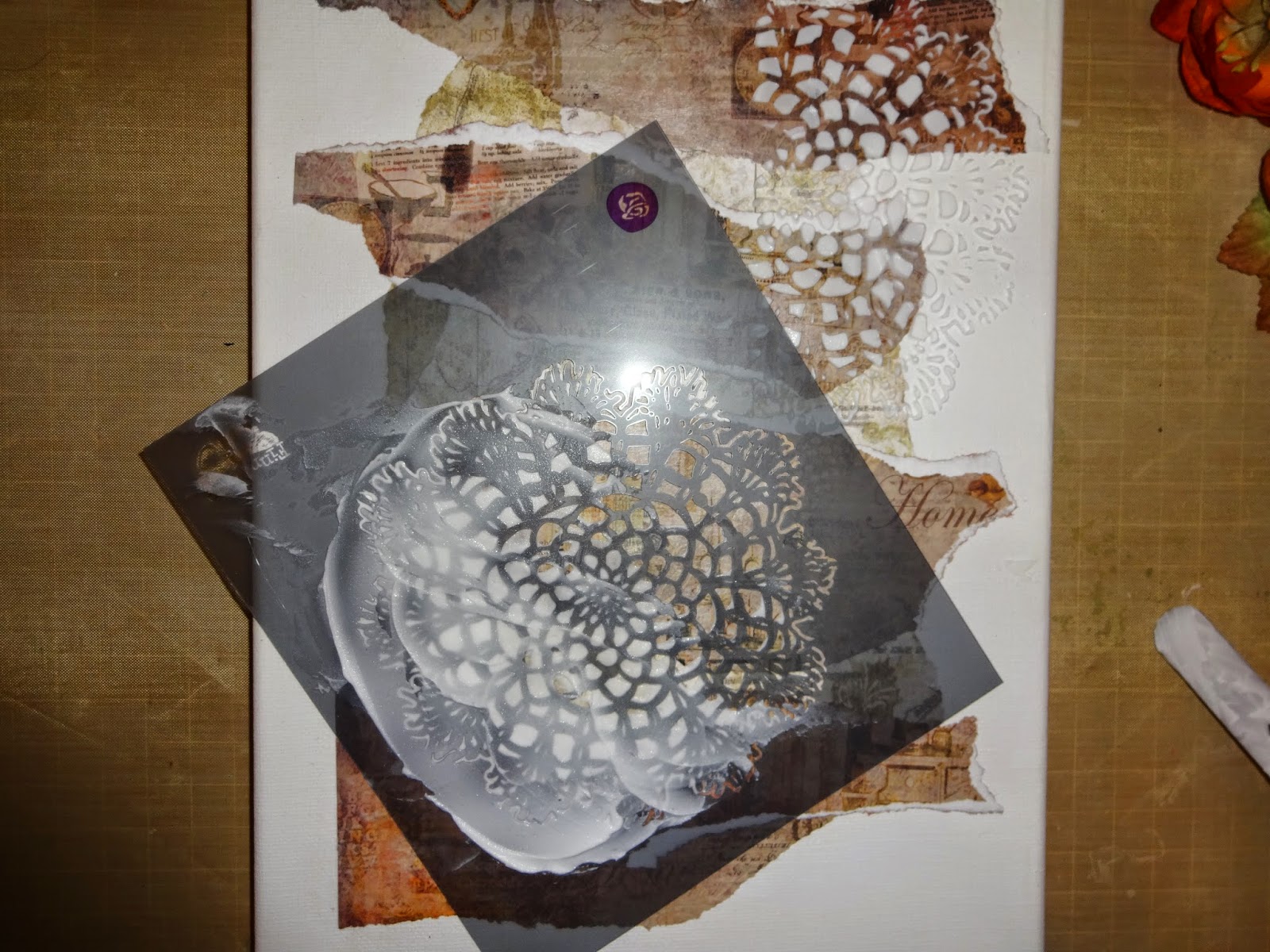 Next with watered down gesso, I painted the entire surface of the canvas to seal everything but also to blend everything together.  I watered it down as I wanted the pattern paper to show through but to be softened as well. 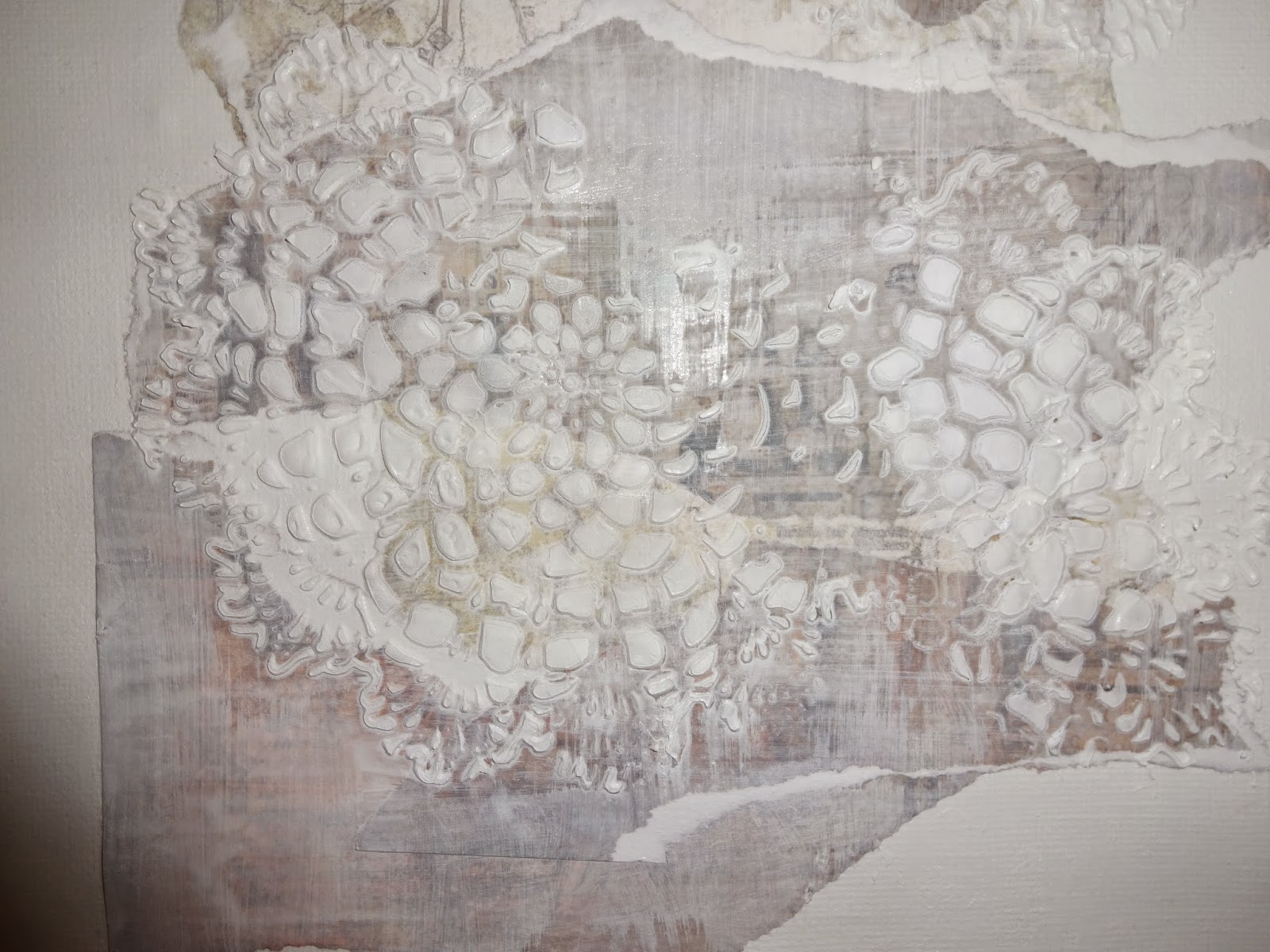 I wanted to use up some sprays that I have had for some time so I sprayed around the perimeter of the canvas with a light brown spray (Lindy's  Moon Shadow Mist).  Dried it then I came back with Heidi Swapp Gold Color Shine over the brown.  After letting everything dry I pulled out some Silks paint Olive Vine and Golden Monarch and added that onto the modeling paste sections.  When the sprays and paint were dry, I stamped around the perimeter with black staz-on ink using a circle stamp and a flourish stamp.  You can see this on the completed canvas picture. 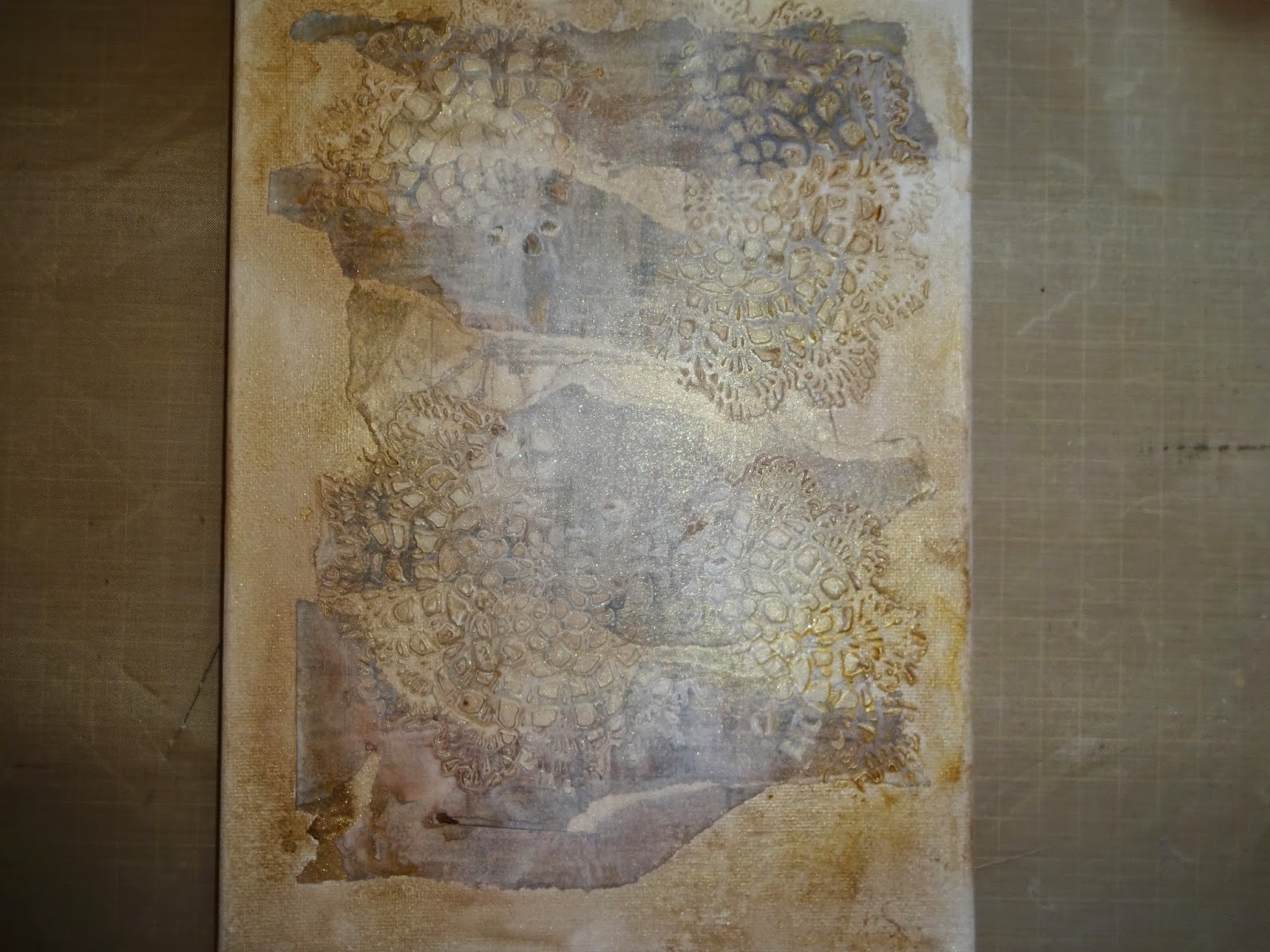 To finish, I selected a few journaling blocks from my bin of goodies and added those around the centre section.  You can see one of them in the upper left corner, another at the bottom left side and one under the key on the right side. The frame was white so I dabbed black staz-on ink and some gold spray here and there.  I adhered the frame in the centre by doubling up glue dots to raise it up.  That made it easier to tuck flowers under the edge of the frame.  I cut an old scalloped metal circle in half and added one half to the top and the other to the bottom.  I then added my flowers around the frame, a large black key, and some metal pieces here and there.  And finally, which is an easy technique, with a small paint brush, I put white gesso onto the tips of the flower petals to soften everything.  Here are couple of closeups. 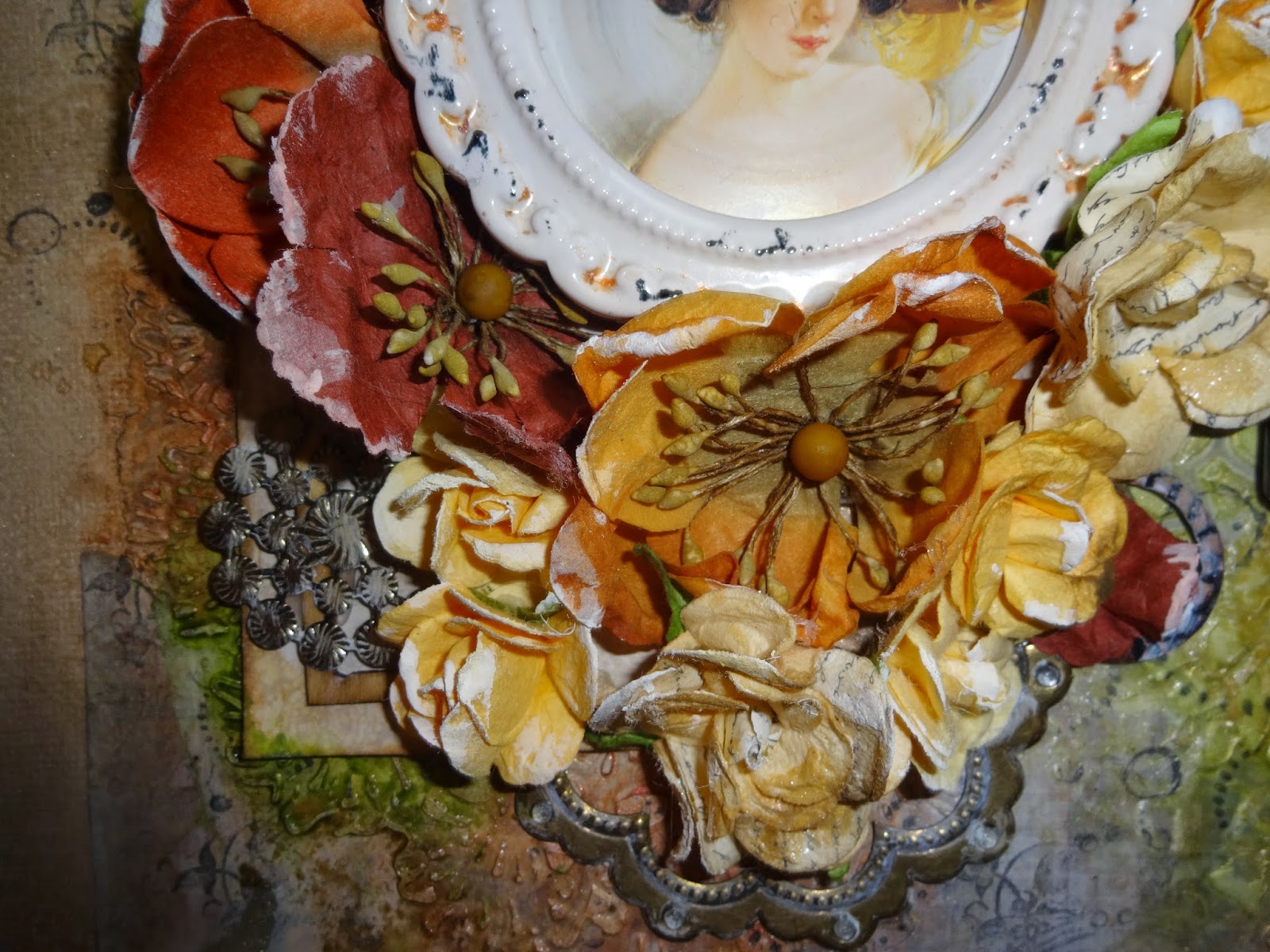 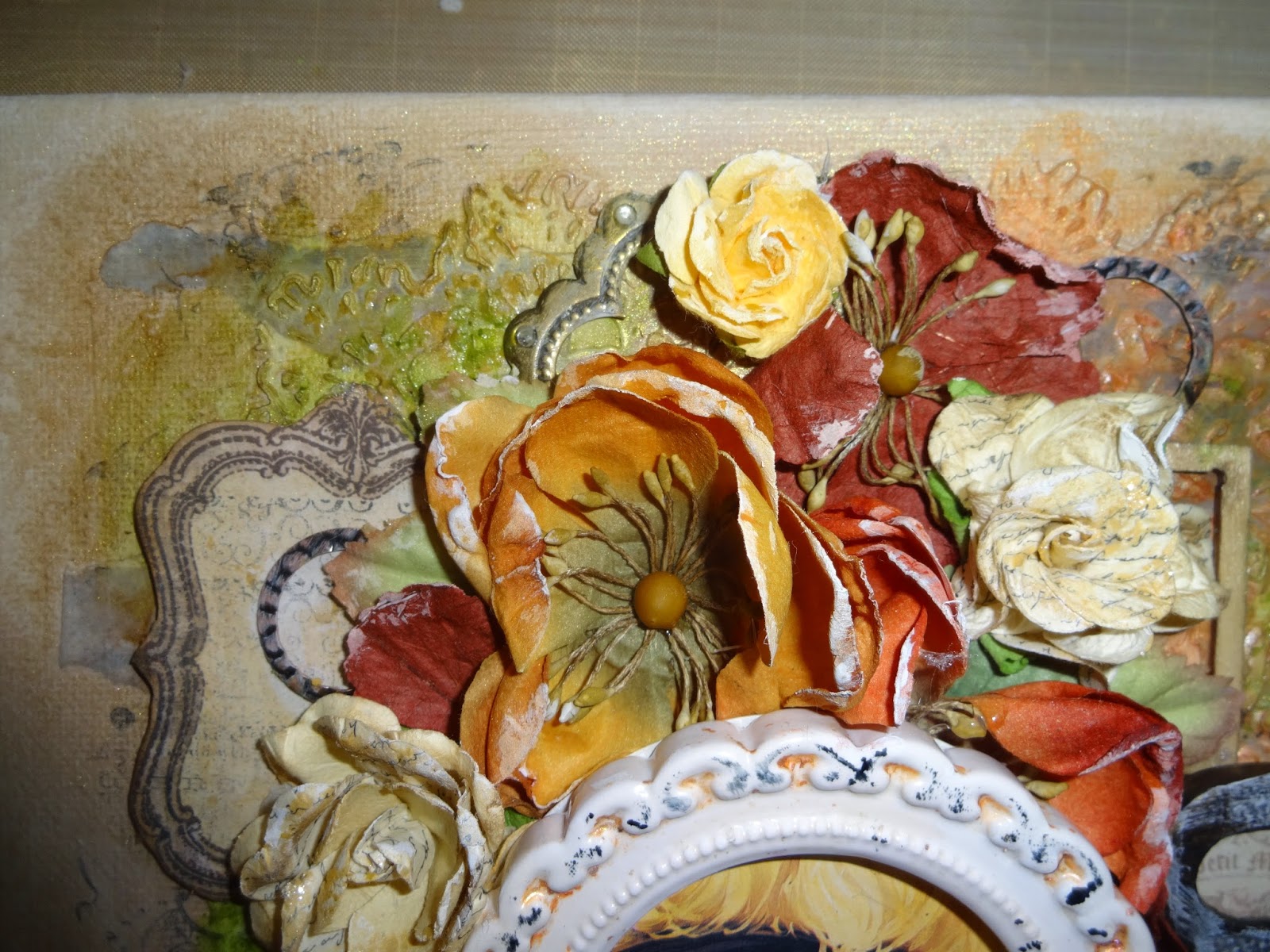 I hope you enjoyed another new canvas.  Until next time, this is Donna wishing you a happy and creative day and remember
"There are no shortcuts to any place worth going."
Beverly Sills
HAPPY SCRAPPING
Posted by Scrapping Bug at 12:45 PM No comments:

January Update at The Scrapping Bug

Well.. CHA is over, and we have placed a ton of orders!!! LOTS of new goodies to start shipping the end of January!!

The next newsletter will have a list of all we have ordered!!

Hello everyone.  Today I thought I would share with you a mixed media layout I did.  For my background paper I used a very old piece of Basic Grey patterned paper which has texture already on it.  I'm finding that since I have been doing more and more mixed media layouts I am using up papers that have been put away for some time.  So here is the layout. 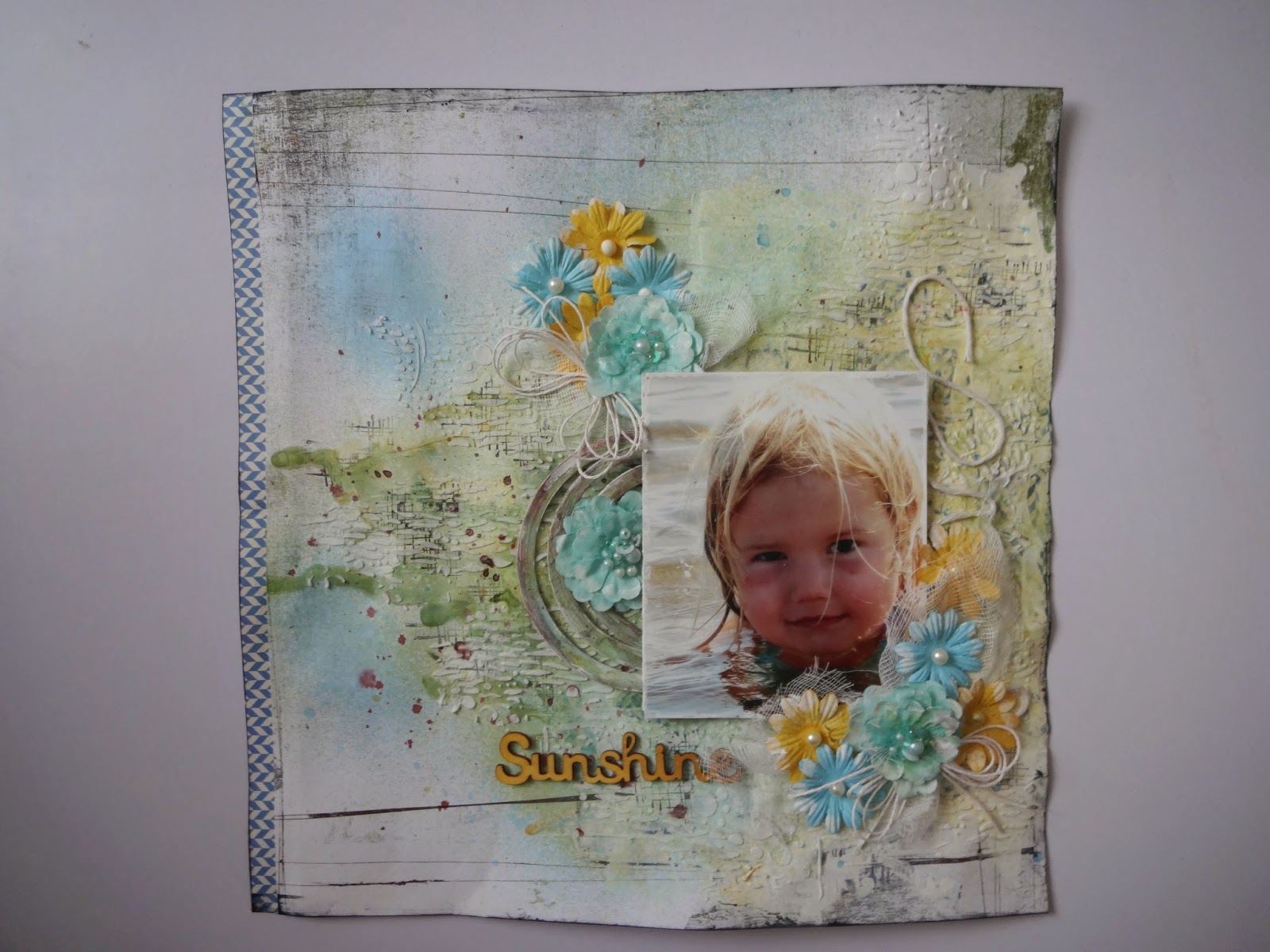 I selected another piece of paper with hexagon striped pattern on it.  See the strip of paper on the left edge of the layout.  That is the second piece of paper.  I cut a 1" strip off the edge of the background paper then I cut a strip 1 1/2" strip off the edge of the striped paper.  I glued it down the left edge of the background paper making sure it measured 12" when I was done.  With the rest of the striped paper I tore off random strips of paper in different lengths.  I adhered these down to the background paper, longer one in the middle and shorter runs above and below this one.  It is hard to see in the picture but you can see the pattern of the paper coming through.  The strip on  the left edge just helped to balance the page.  With a spatula I painted white gesso over the paper pieces up and down then across.  Don't have to be too fussy and I did not completely cover the paper with the gesso.  I did it almost like a basket weave .  This will give more texture.
I then selected a stencil which looks like water bubbles.  Using moulding paste I applied it to the left side of the page in random spots and then again on the right side edge.  When everything was dry I randomly stamped here and there with a favourite stamp and black staz-on ink.   I selected a yellow, turquoise and green spray and first sprayed with the yellow, then the blue, and lastly the green.  You can see in the layout picture where I sprayed the colours.  I did let the green spray run a little by spritzing with water and slanting the paper so that it would run across the page.  The rest was easy.  I added some white cording along the right side edge of the picture, 3 die cut circles to the left of the picture and my flower sections with some cheese cloth behind them.  I edged the flowers with white gesso which is another fav technique that I like.   Made a couple of loopy bows and tucked them under the flowers.   I also edged my picture with white gesso to help it blend into the layout.
A couple of closeups. 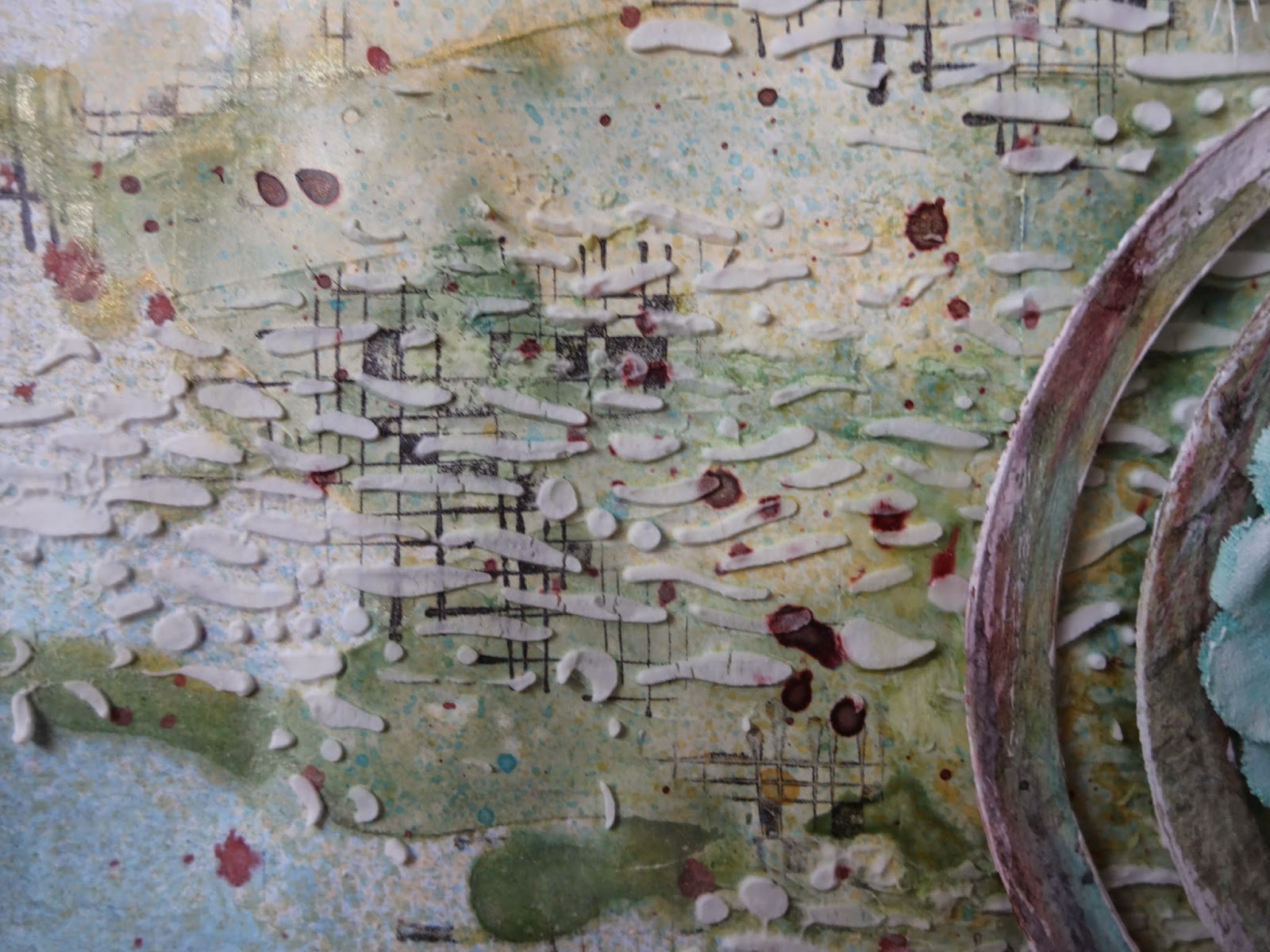 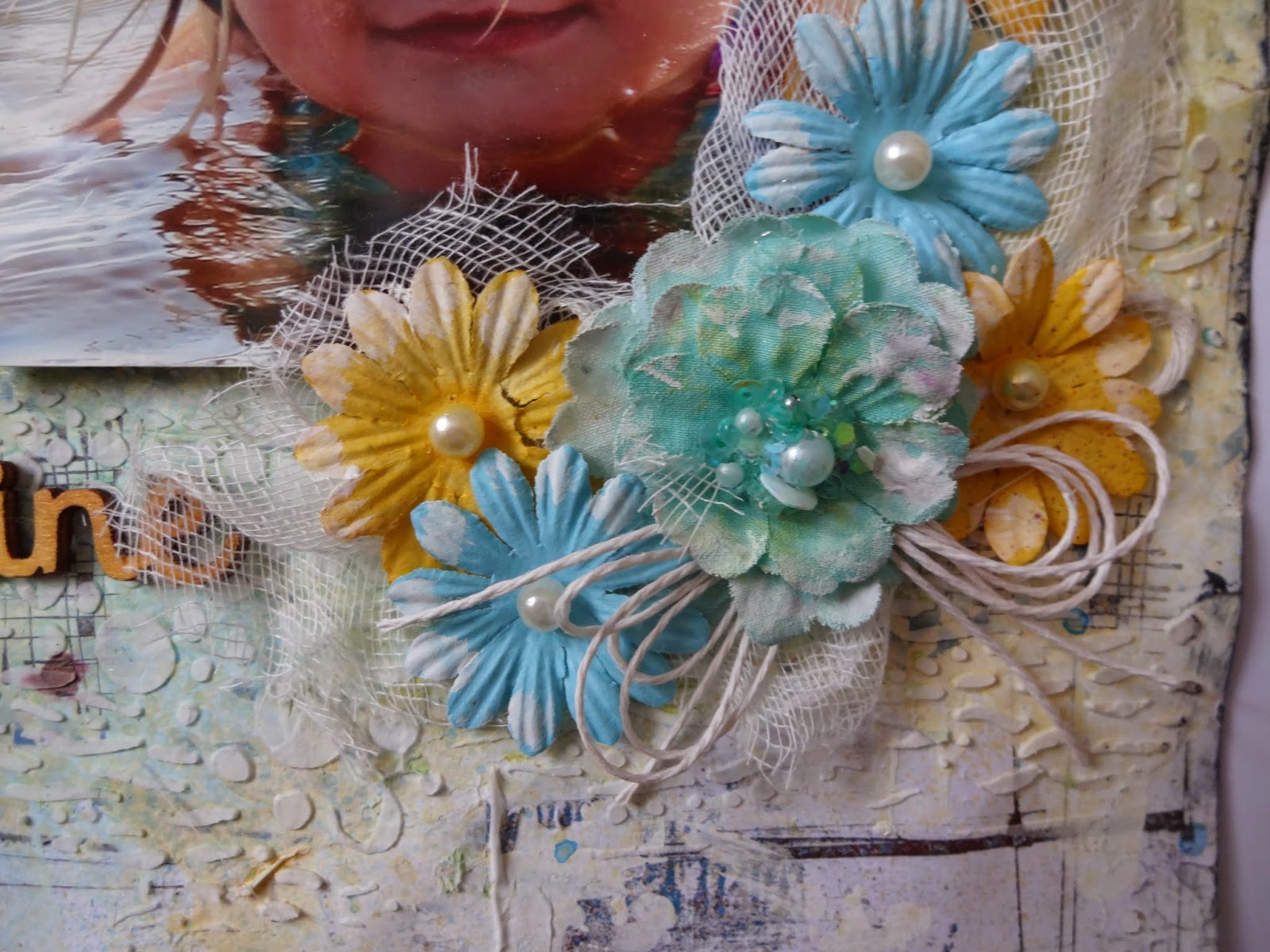 I hope you enjoyed.  Until next time,

Hello everyone,  I hope you had a wonderful Christmas and I wish you a very happy New Year.
Today I thought I would share with you a mixed media project on a canvas board.  Canvas boards are great.  They are much thinner than a regular canvas and can be framed. 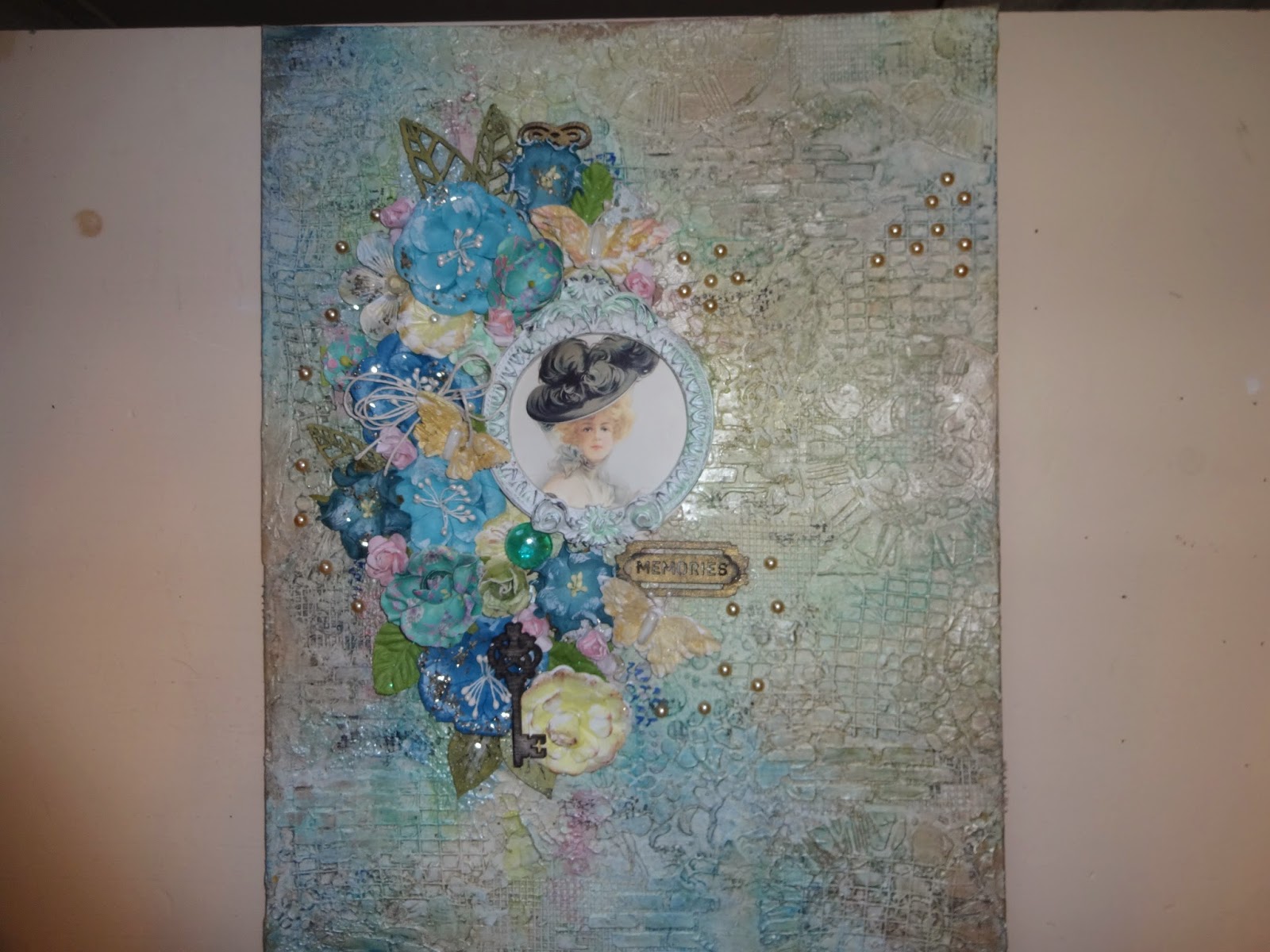 Again, I did a lot of texture on the background using netting, drywall tape, and a lot of moulding paste with several different stencils.  Below is a closeup of a couple sections on the canvas. 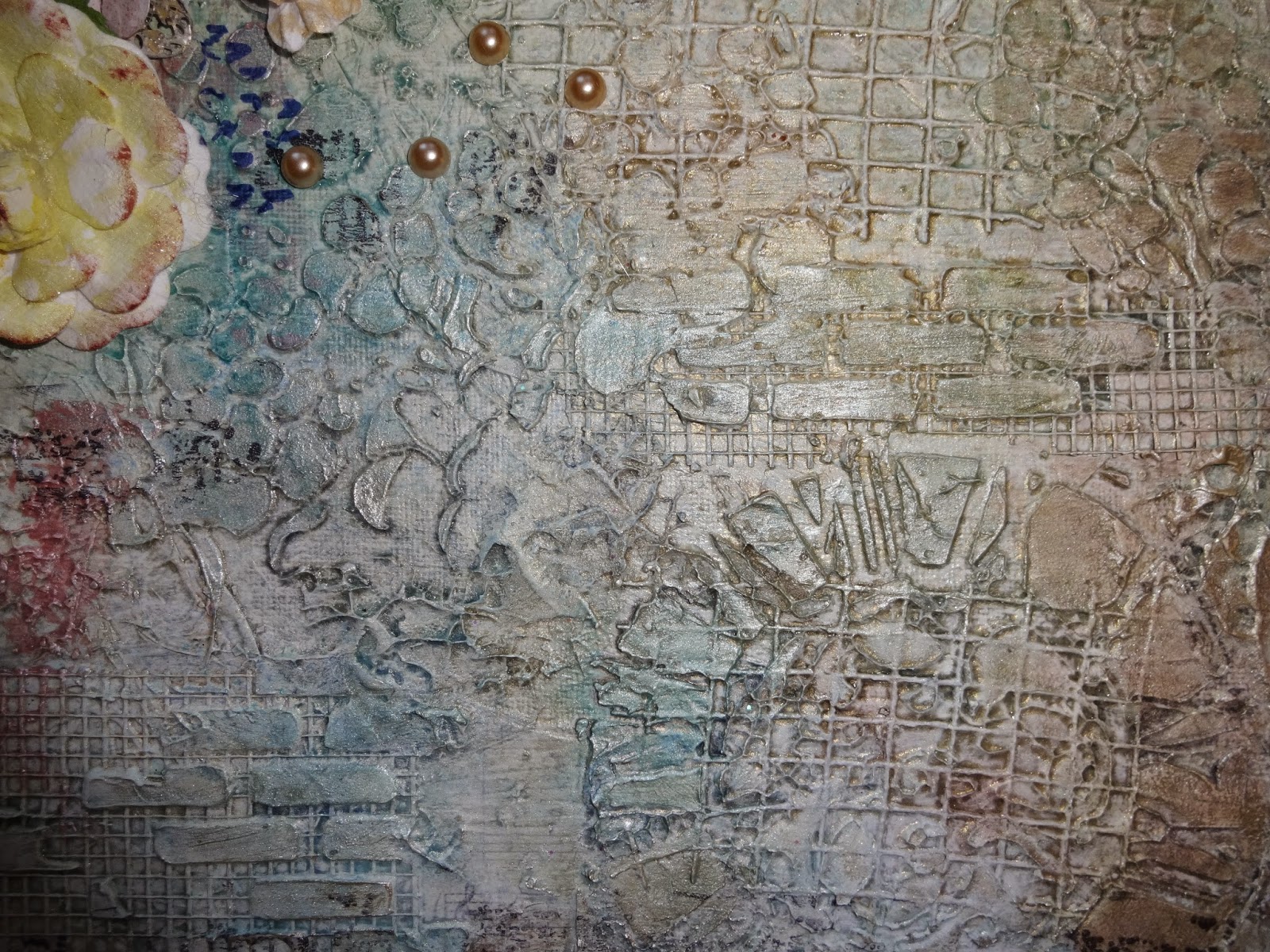 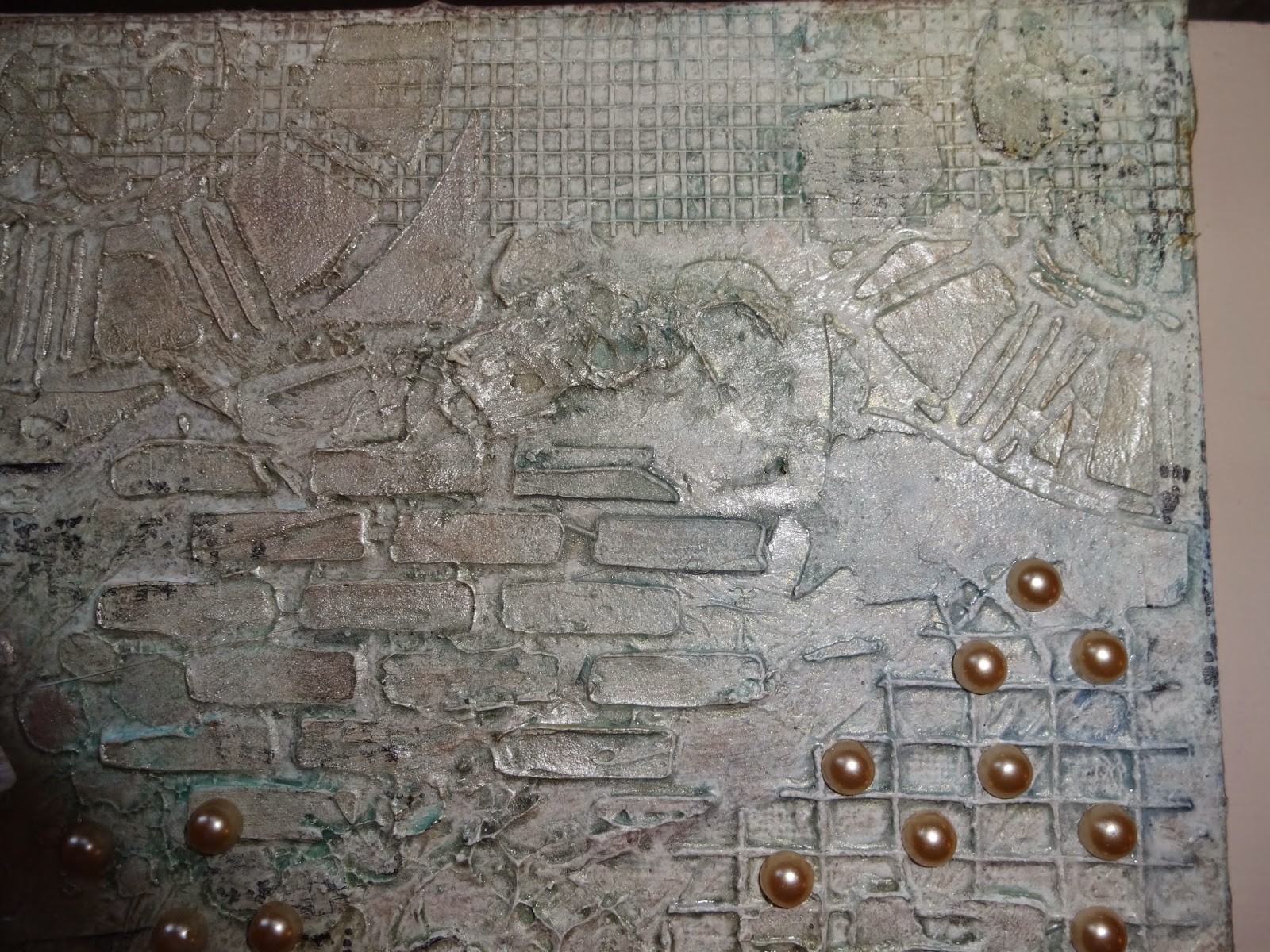 When the media items were completely dry I sprayed the entire surface with a gold spray, let this dry, then sprayed with a turquoise spray here and there, and finally with a darker blue spray in the corners and the side edges.  I did a bit of stamping here and there with black staz-on ink - just around where the flowers are.   I also added a bit of light pink paint (watered down) with a paint brush in and around the flowers. The picture in the frame was a last minute choice.  I had several of these in my stash and since it fit perfectly behind the frame, I decided to use it.  I dry brushed white gesso on most of the flowers, added some wood leaves painted with a texture paste and tucked in some metal pieces.  A few pearls here and there and there you have it.  Here is a close-up of a section of the flowers. 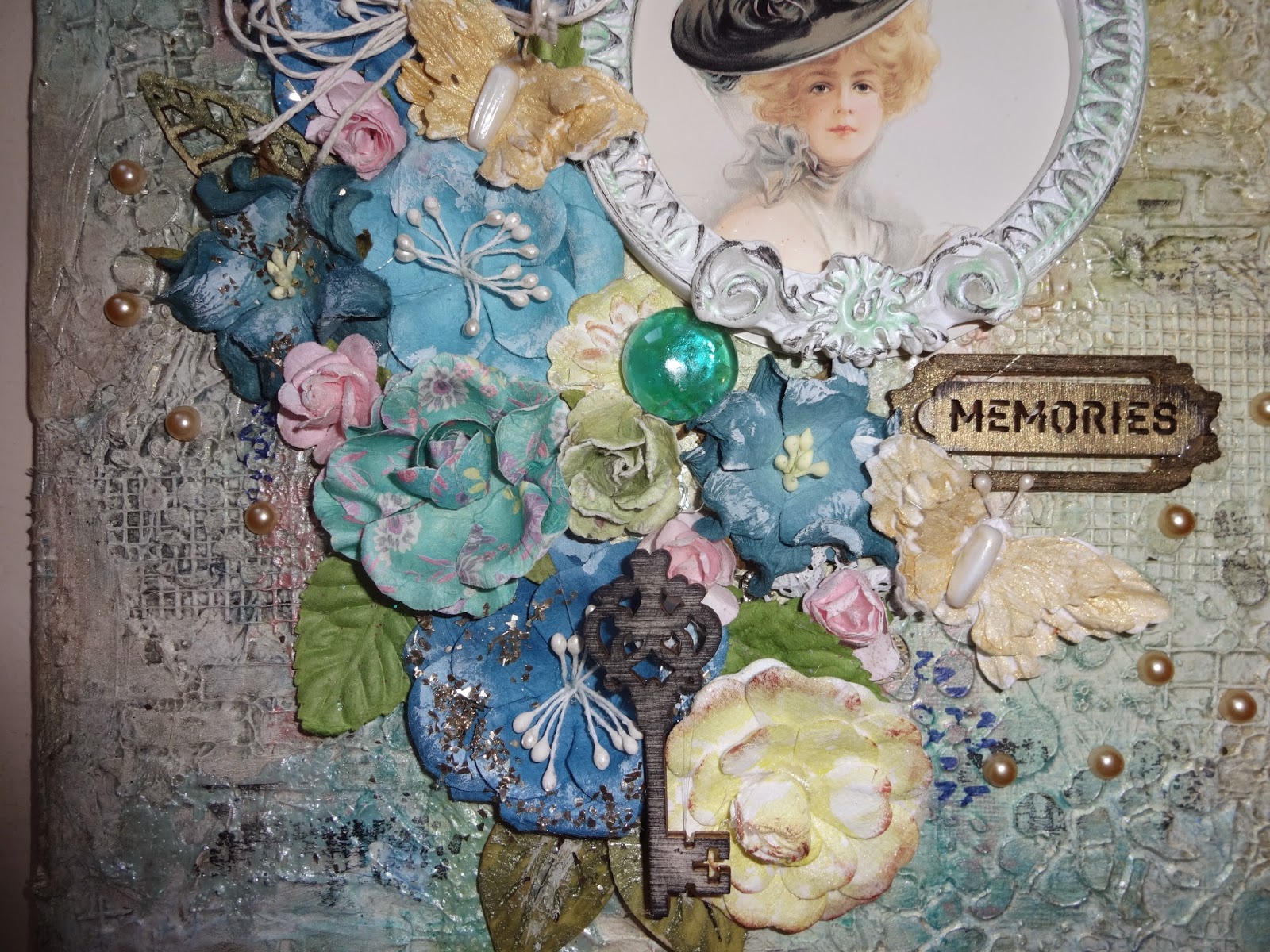 I hope you enjoy!
Until next time,
"Some people make the world more special just by being in it."
Posted by Scrapping Bug at 11:18 AM No comments: